MOA’s A Future for Memory, Shows the Perseverance of Hope 10 Years After the Japanese Tsunami

It’s now been ten years since the earthquake and ensuing tsunami in Japan. As someone who was on the other side of the globe when this happened, I distinctly remember the images of homes swept to sea as if they were made of paper. While the news reports have since faded in my mind as time has passed, the current Museum of Anthropology exhibit, A Future for Memory, shows that those old images are still as fresh as ever for people living in the wake of the tsunami and Fukushima power plant failure.

While it’s a heavy subject, and hearing the stories of how the country is still rebuilding are harrowing, the show outlines a sense of hope that can sprout from a tragedy like this.

Featuring works from a handful of Japanese artists, the exhibition uses different mediums, be they video, photography or miniature models, to communicate the sense of scale of the event. Everyone was affected, whether through losing a loved one, a home, or a means of livelihood.

In the opening section by photographer Atsunobu Katagiri, he’s created floral arrangements in the husks of wreckage strewn about the countryside. As he lived in Haramachi, the closest livable town to where the powerplant was, his photos capture a sprawling emptiness that the landscape has become while simultaneously allowing nature to grow and start over. Seeing wildflowers thrive through the rusted hood of an abandoned car brings to mind the resilience of the Japanese population, through tragedy. It’s a theme that occurs throughout the show, whether it’s in a wall of salvaged photographs and how an astounding effort was put together to reconnect these wilted memories with their original owners, or in a documentation of all the felled irradiated trees captured with countless charcoal rubbings.

While each section adds a layer to how the event affected different groups of people, for me the staggering sense of scale was driven home with the “Lost Homes” Scale Model Restoration Project. At 1:500 scale, the piece shows a miniature landscape of the villages most affected by the disaster and how they once looked. As you tower over each dice-sized home, small flags painted by student volunteers mark memories of each space, showing just how many lives were upended, and lost. Created with paper and paint, the diorama gives a haunting reminder of how vulnerable the area was to the devastation that was to come.

A Future for Memory has a beauty to it that’s hard to express as an outsider. When we’re not directly affected by something with the magnitude of a 9.0 earthquake, it’s easy to detach yourself from the reality of what’s going on somewhere else. But seeing the first-hand, intimate accounts of the destruction done even ten years after it’s happened, it’s hard not to look back on what might’ve seemed like just another weekly news item. What’s more, is the inspiration found through addressing the hurt that still beats on. While you might not have been there, it’s a message that can be universal.

Wall for Women: The Story Behind Vancouver’s Newest Mural

Riopelle: The Call of Northern Landscapes and Indigenous...

Sankofa at MOA: A Connection Between African Spirit...

The View From Here at SFU Gallery

The New Bobbie Burgers Exhibition Blooms From the...

Sho Sho Esquiro: Doctrine of Discovery at the...

EDITH HEATH AND EMILY CARR: FROM THE EARTH 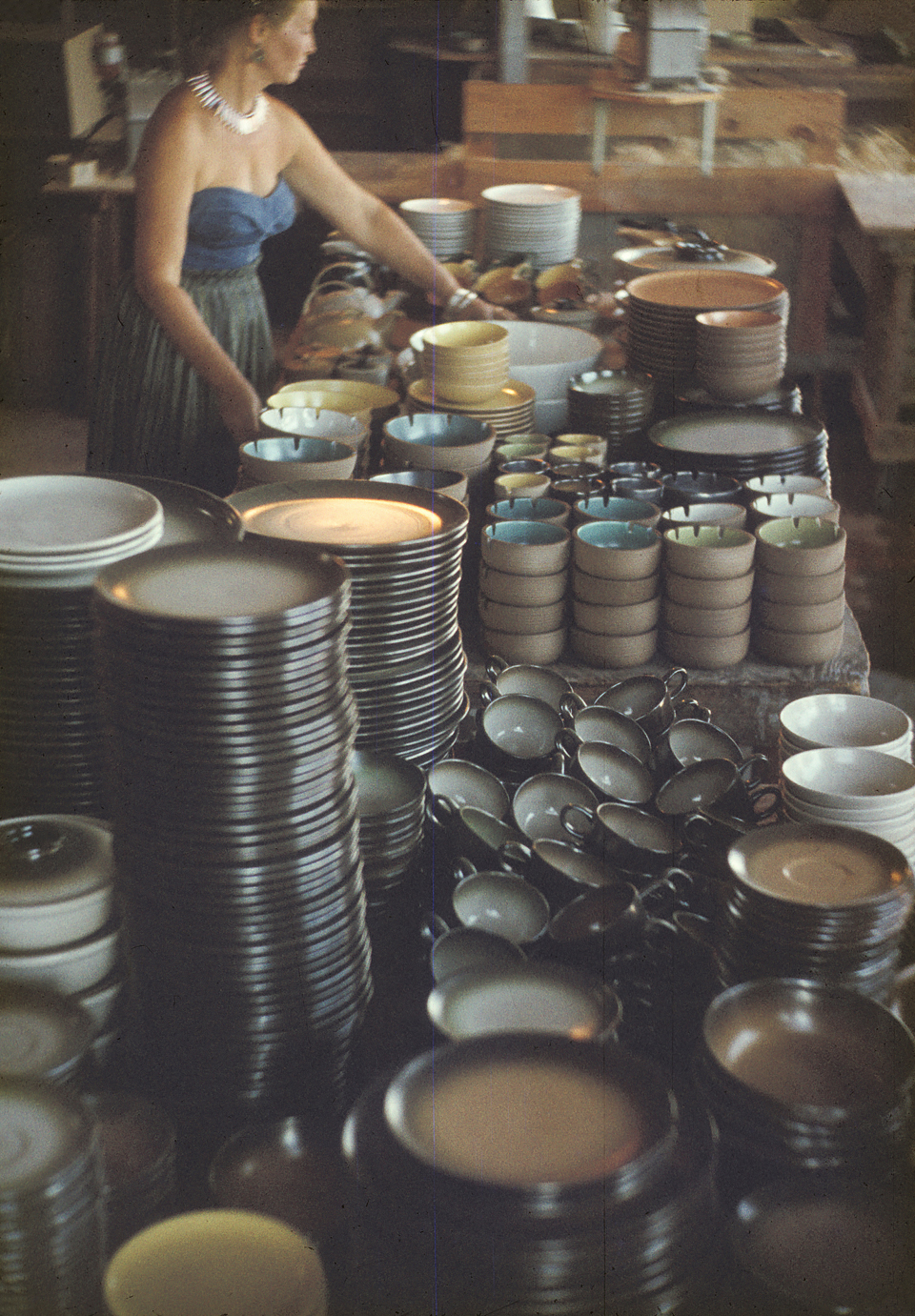 Edith Heath and Emily Carr: From the Earth brings together the work of two artists whose art was profoundly influenced by the land and landscape—its colours, light and materials. Emily Carr

Edith Heath and Emily Carr: From the Earth brings together the work of two artists whose art was profoundly influenced by the land and landscape—its colours, light and materials. Emily Carr (1871–1945) and Edith Heath (1911–2005) never met, but both were modernist women living on the West Coast who built careers in the creative arts that spoke to their time and place. This project builds on an ongoing program of exhibitions that offer an opportunity to consider the art of Emily Carr in a different light. Some of the exhibitions have focused on directly shared histories or on stylistic affinities, while others have pointed to the significance of Carr’s influence on modern and contemporary artists. 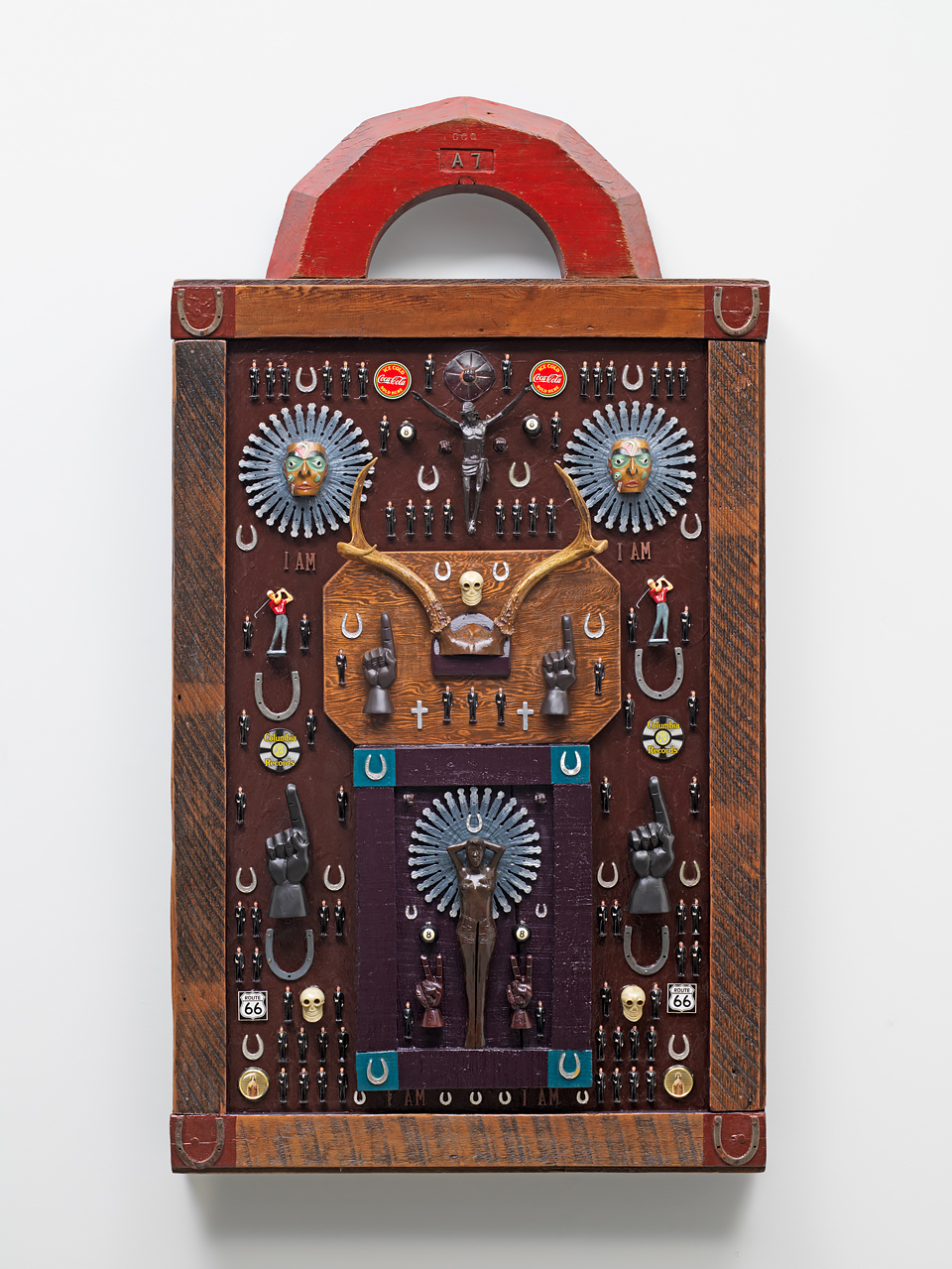 For over thirty years, Jan Wade has been creating mixed-media paintings, textiles and sculptural objects, drawing upon her lived experience as an African Canadian person and her mixed cultural heritage. Jan

For over thirty years, Jan Wade has been creating mixed-media paintings, textiles and sculptural objects, drawing upon her lived experience as an African Canadian person and her mixed cultural heritage. Jan Wade: Soul Power brings together the artist’s diverse body of work alongside new pieces made specifically for the exhibition.

Personal experience and sustained research inform Wade’s unique practice, which she conceptualizes as an ongoing journey—one that is philosophical, cultural, intellectual and embodied—as she explores the places and practices of her ancestors alongside contemporary political concerns and social issues.

Political, social, spiritual and material transformations are integral to Wade’s practice, and she often uses found objects and recycled materials in her works. Picked up in alleys, given to her by friends and sourced from thrift stores, these objects are used to point to a “generational ecological consciousness practiced by the disenfranchised.” In other words, Wade’s unique aesthetic was born out of necessity as well as social conscience. 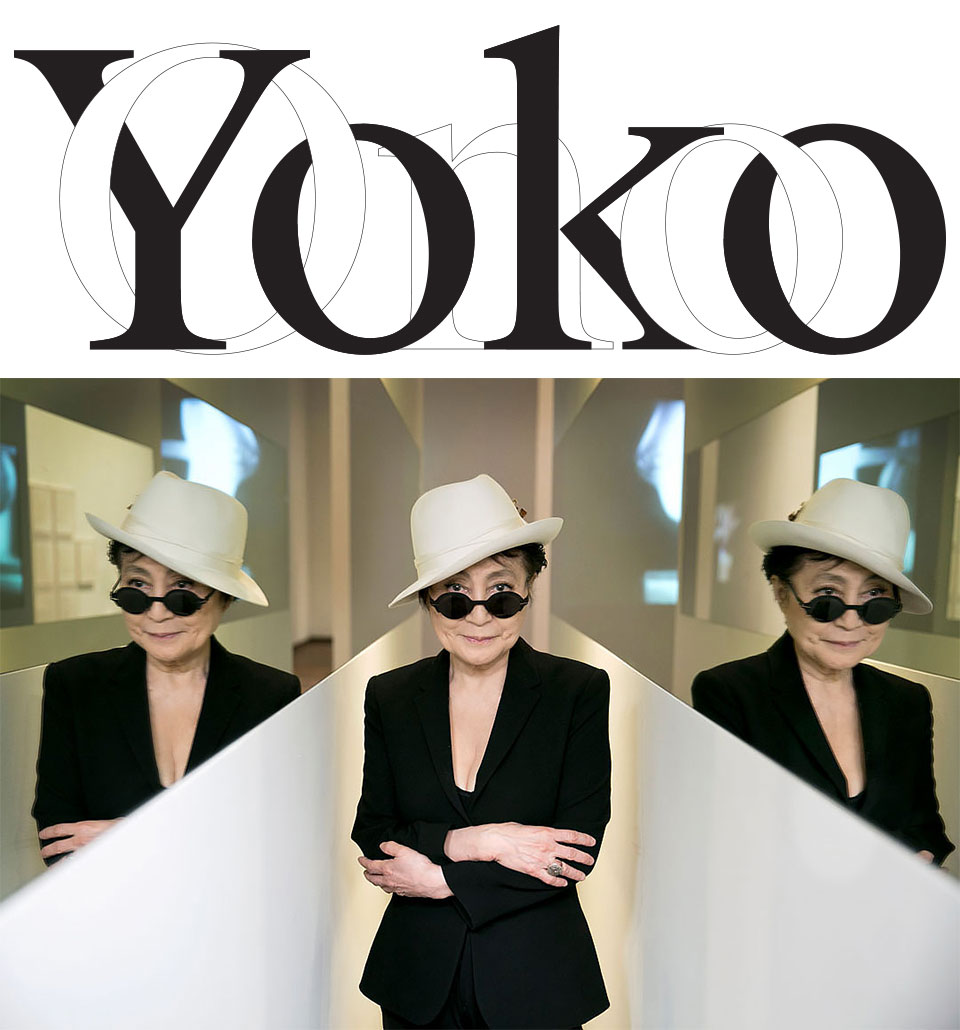 GROWING FREEDOM: The instructions of Yoko Ono / The art of John and Yoko underscores the cornerstones of action, participation and imagination in the work of Yoko Ono (b. 1933) and examines

GROWING FREEDOM: The instructions of Yoko Ono / The art of John and Yoko underscores the cornerstones of action, participation and imagination in the work of Yoko Ono (b. 1933) and examines the collaborative works she undertook with her late husband John Lennon (1940–1980). A visionary, pioneering artist with a career that now spans more than 60 years, Ono created a new kind of relationship with spectators and fellow artists, inviting them to play an active part in the creative process.

This major exhibition is organized in two parts. The first section focuses on Ono’s instruction works, which break down barriers between artistic disciplines and emphasize Ono’s radical approach to visual art. By inviting the viewer to partake in the artistic process, she not only creates works that continue to grow and change but also thwarts the conventions of the art market. Exhibited works include instructional pieces that require the visitor to complete the work, through actions such as mending broken china (MEND PIECE, 1966), hammering nails into canvas (PAINTING TO HAMMER A NAIL, 1966) and writing their feelings toward their mothers on a sticky note and attaching it to the gallery wall (MY MOMMY IS BEAUTIFUL, 1997). Other works solicit participation from outside the institution, including ARISING (2013) and WATER EVENT (1971), which will feature the participation of local Indigenous artists.

The second part of the exhibition presents an arc of collaborative projects for peace undertaken by Ono and Lennon. Among these are the WAR IS OVER (If you want it) peace campaign (1969) and the BED-INS FOR PEACE (1969). Through an approach that spotlights storytelling and privileges listening, this section of GROWING FREEDOM also features the stories of various people who participated in Ono and Lennon’s art projects, told in their own voices and words.

Through a select survey of instructions and performance pieces, the exhibition imparts Ono’s massive impact on contemporary art practices and her ongoing activism through art. The urgency and spirit of the exhibited artworks are perhaps more pertinent and important than ever.

Visitors are encouraged to bring headphones to access audio content throughout the exhibition. A limited quantity of disposable headphones will be available at the Admissions Desk.

Riopelle: The Call of Northern Landscapes and Indigenous Cultures

Riopelle: The Call of Northern Landscapes and Indigenous Cultures focuses on the artist’s engagement with Canada’s northern landscape and emblematic use of Indigenous motifs to construct highly complex paintings, prints and

Riopelle: The Call of Northern Landscapes and Indigenous Cultures focuses on the artist’s engagement with Canada’s northern landscape and emblematic use of Indigenous motifs to construct highly complex paintings, prints and sculptures. Jean Paul Riopelle was a member of the Montreal-based collective known as les automatistes that embraced Surrealist ideals during the 1940s and he would go on to become a leading Tachisme or Action Painter in Paris throughout the 1950s and 1960s. On his frequent trips back to Quebec, the renowned artist immersed himself in the province’s rugged northern terrain, while continuing a long held respect for contemporary and historic Indigenous art from British Columbia, Alaska, Quebec and Nunavut. The core of this exhibition and accompanying publication will examine Riopelle’s expansive production from the 1950s onward, with an emphasis on his rarely studied practice of the 1970s. The exhibition is on display at the Audain Art Museum from October 23, 2021 to February 21, 2022.

The exhibition is developed, organized and circulated by the Montreal Museum of Fine Arts. It was curated by guest curators Andréanne Roy and Yseult Riopelle as well as by Jacques Des Rochers, Curator of Quebec and Canadian Art (before 1945), MMFA. 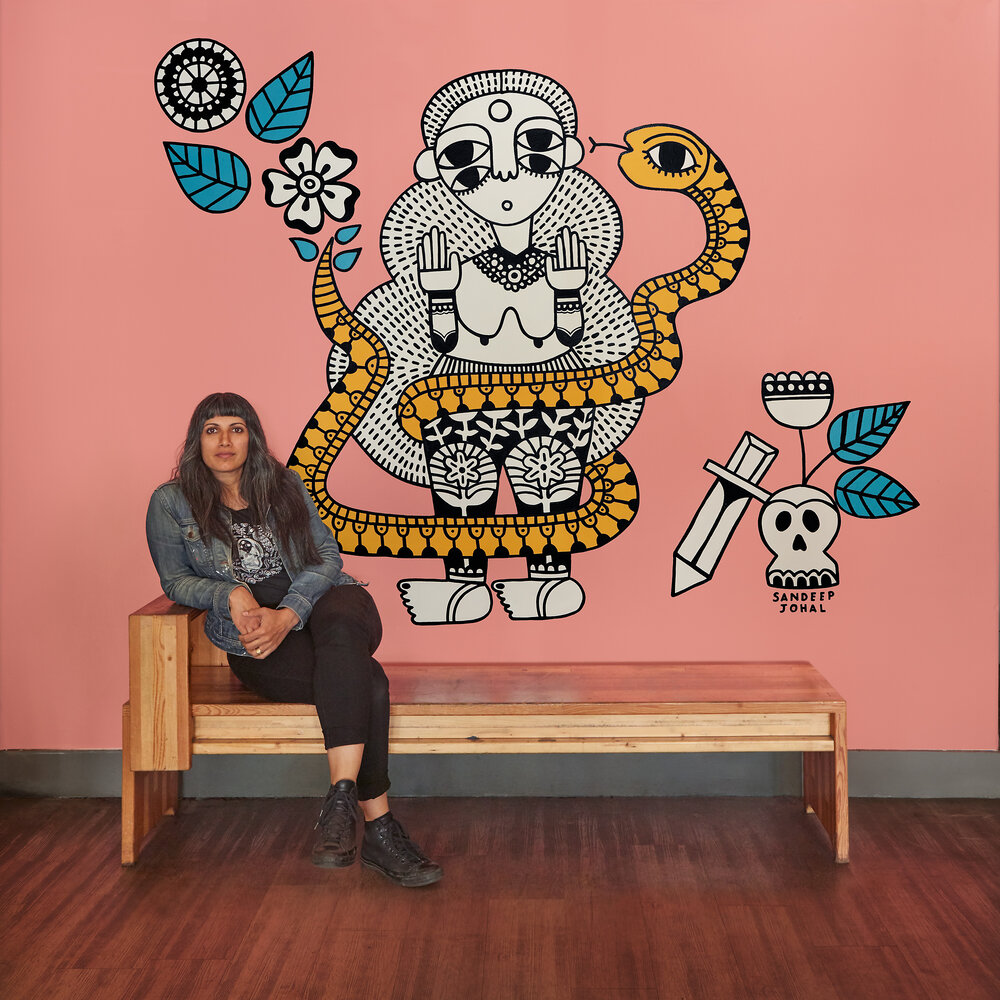 SPOTLIGHT is a new collaboration between the Art Rental & Sales Program (AR&S) and the Curatorial Department of the Vancouver Art Gallery. AR&S is a not-for-profit program operated by the

SPOTLIGHT is a new collaboration between the Art Rental & Sales Program (AR&S) and the Curatorial Department of the Vancouver Art Gallery. AR&S is a not-for-profit program operated by the Gallery with a mandate of supporting emerging artists based in British Columbia.

In this collaboration, Gallery curators invite an artist represented by AR&S to create a mural on a feature wall in the Gallery Lobby. This special initiative aims to provide new opportunities for emerging artists, as well as to activate the lobby space for thousands of visitors each year.

The project launches with a new work by Vancouver-based visual artist Sandeep Johal, whose colourful geometric forms and intricate black and white line work is aesthetically and conceptually inspired by her South Asian heritage. Johal believes in the power of art to create awareness around issues related to cultural identity, gender equality and human rights. Her art practice is an expression of her social and cultural concerns, with a focus on gender justice. Johal has been represented by Art Rental & Sales since 2018.

Sankofa is the idea of moving forward while reaching back to connect to one’s heritage. It is the notion that taking pride in heritage helps us to move into

Sankofa is the idea of moving forward while reaching back to connect to one’s heritage. It is the notion that taking pride in heritage helps us to move into the future. Sankofa comes from the Ghanaian Akan language, and the word and its essence have been adopted by many African and Black people around the globe as an expression of cultural and political affirmation.

Sankofa: African Routes, Canadian Roots looks at some of the divergent—and often fragmented—paths of political mobilization and cultural assertion that African and Black people in the diaspora have taken. Centered on works by contemporary artists from Lagos, Nigeria, and Vancouver, in conversation with objects in MOA’s permanent collection, this exhibition shares stories, histories and projects of African and Black affirmation. In particular, it draws connections to historical contributions and the growing vitality of Black Canadians in Vancouver.

Ultimately, Sankofa: African Routes, Canadian Roots celebrates different ways of understanding the world through the lenses of African and Black communities, the wealth of their cultural and art practices, and their inspiring legacy.